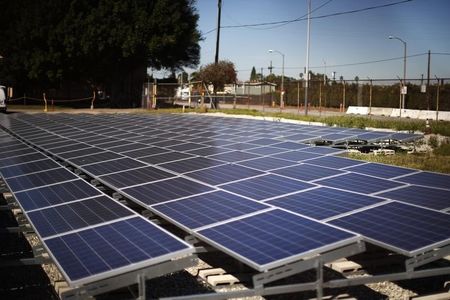 (Bloomberg) — As the European Union launches a new push to make hydrogen one of the clean fuels of the future, two French industrial giants say they’ve found the right project to rapidly scale up the nascent industry.

Engie SA (PA:ENGIE) and Air Liquide SA (PA:AIRP) want to build solar farms big enough to power 450,000 homes in France’s sun-drenched Provence region, with enough electricity left over to produce hydrogen by electrolyzing water. Some of the clean-burning gas would be sold to refineries and chemicals makers in Fos-sur-Mer, curbing their emissions of carbon dioxide.

The “HyGreen Provence” project would produce renewable hydrogen at a much bigger scale than anywhere else, and trim CO2 emissions that come from the refining and petrochemical complex. The French industrial sector uses about 1 million tons of hydrogen each year, and the government would like between 20%-40% of this to be carbon-free by 2028.

But the companies need government subsidies to do it. While producing so-called green hydrogen, which is done using water electrolysis and emits no CO2, it costs about three times as much as steam methane reforming — a process used by refiners which does produce the greenhouse gas.

“For the project to work, we need support from the state and incentives for companies to switch to green hydrogen,” Gwenaelle Avice-Huet, Engie’s head of renewables, said in an interview. “We need to scale up with projects of significant sizes to lower costs.”

The European Union said the hydrogen industry will benefit from stimulus packages to revive the economies of its member states which have been hit hard by the coronavirus pandemic. Using hydrogen will also accelerate the energy transition and help reach the bloc’s goal of becoming carbon neutral by 2050. That backing is giving companies confidence that they’ll be able to produce cost-competitive hydrogen by the end of the decade.

The HyGreen Provence project would initially be connected to the gas grid and fuel local fleets of electric buses and trucks. Its electrolysis capacity would be ramped up to as much as 250 megawatts by 2026. This would produce about 20,000 tons of clean hydrogen each year, according to Avice-Huet.

“We need to finance large pilot projects to demonstrate their viability,” said Pierre-Etienne Franc, the head of the hydrogen business at Air Liquide, the world’s second-largest maker of industrial gases. The company is also seeking government subsidies to develop large electrolysers to supply big users including steelmakers, and liquefaction plants to truck the gas to smaller customers.

“Developing a supply chain based on liquid hydrogen to transport the fuel to end-users, in places where building an electrolyser on site wouldn’t be competitive, is key,” Franc said.

Globally, the race to scale up hydrogen has begun. Air Products (NYSE:APD) & Chemicals Inc. signed a deal with Saudi partners to develop a $5 billion hydrogen-based ammonia plant in the kingdom. It will use electrolysers made by Germany’s Thyssenkrupp AG (DE:TKAG) and will be powered by renewable energy. The U.S. company plans to export the ammonia for further processing into hydrogen.

In Europe, Germany recently took the lead, presenting a 7-billion euro ($7.9 billion) plan last month to support its domestic hydrogen industry. The country is targeting 5 gigawatts of green hydrogen production capacity by 2030, which would double by 2035. In 2018, France committed just 100 million euros to subsidize the purchase of vehicles powered by hydrogen. The country is expected to present a more ambitious plan in the coming months.

The company was recently selected to install a 20-megawatt electrolyzer to help produce clean methanol in the Netherlands. To replace the steam methane reforming process with electrolysis in a standard oil refinery or ammonia plant, you need between 100-400 megawatts of capacity, Carme said.

“It’s important to scale up,” said Franc at Air Liquide. “France can’t pretend to be a champion in that area if there’s no market development that justifies investment on products that will be both for foreign and French markets.

UK’s Sunak: too early to predict shape of recovery from recession

Gold Up on U.S. Stimulus Hopes and COVID-19 Fears

Oil gains after stockpile draw amid hopes for coronavirus vaccine

A Day After Meltdown, Gold Finds Way Back to Under $1,900

By
November 10, 2020
Get the daily email that makes reading the news actually enjoyable. Stay informed and entertained, for free.
Your information is secure and your privacy is protected. By opting in you agree to receive emails from us and our affiliates. Remember that you can opt-out any time, we hate spam too!

Most Philippine employers say they plan to raise salaries this year